None of these have been my finest moments in parenting.

The times when we've stayed out too late with friends, permitting mounting sugar and tiredness in little bodies, knowing full well when the meltdown came, who was responsible.

Tempers lost during particularly rushed mornings, when "I said, you need to get your shoes on now" has sounded less like encouragement and more like a drill order.

Or that time I dumped a bucket of water on T's head because we were all tired and she wouldn't rinse the shampoo out of her hair.

But tonight I experienced a new level of maternal failure.

Its pain comes, in part, from its relative innocence. T and N had a performance at their after-school program. For weeks we've heard the off-tune squeak of Moana and Justin Timberlake lyrics. I told them, co-workers and grandparents that I was not picking them up after school at our usual Thursday time, I'd stay at work later so that they could prepare and I'd arrive for their performance at 5:30 p.m.  T was in the first song, N was in the last, they kept emphasizing.

It had been yet another busy, stressful day during a sandwich week between two work trips; there was far too much on my plate and everyone else's. I tried to push through a few more things as the hour rounded 5 p.m. when I remembered I'd parked at the bottom of the hill. I rushed out, hustled down the hill in high-heels, checking traffic, calculating routes, driving a little too fast, not calling my folks so that I could concentrate. Turning onto the kids' school's street I relaxed - 5:27 p.m., I'd made it! 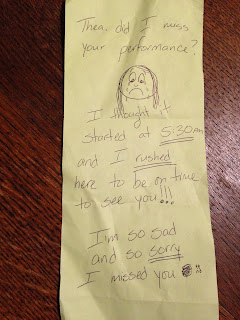 Outside was a bit quiet, only a couple parents hurrying in. I entered the packed auditorium, saw another class singing on stage.  Then, I saw her. Noticing me from the floor, I got a glimpse of her furious, tear-streaked face before she whipped her head and body away. Her shoulders were heaving.

I had missed it.

I grabbed a program, with the insolent 5 p.m. start time glaring from the top line. I scribbled furiously, trying to explain, then ran up and passing it to her like I too, was in second grade. She thrust it off her lap, while her friend whispered the obvious: she's really sad that you missed her performance. I said, I know, that's why I wrote this note. The next song starting, I retreated to the aisle. Her friends passed the note around, one even getting up to share the drama with her parents; I was mortified. T still refused to read it.

After another song or two, N took the stage to give the Kindergartener's finale. T wouldn't even look at me. I tried to wave at N so at least he'd see I was there, but I was terrified it would add salt to T's wound if she noticed. In the end, even he thought I hadn't come.

The performance ended, everyone jumping up to hug their loved ones. I ran to T. She wouldn't even let me touch her, let alone hug her, apologize, or coax her to the car. She was heartbroken. People congratulating their little performers tried not to stare at our spectacle. A sobbing child and her distraught mother, also in tears, unable to move in the middle of a packed auditorium of revelers.

Eventually, I coaxed her outside. Where we slumped against a wall and cried at the pain and disappointment wrought by a 30 min mistake. Eventually, we went home.

Tonight, she made the family an illustrated book with all of us in it and a note on her page: "I love you"

N also suggested a re-do for T's performance. It's not going to undo the disappointment of searching an audience in vain for the one person you wanted to be there. But it's a new memory to add to the imperfect journeys of both growing up and parenting.

Loss from a distance

The sun is too damn bright. Glinting off shellacked California facades. The palm trees repulse me in their barren plastic perfection. I need cedar and fir so tall and thick I cannot see the sky. I need the sky, low, and grey and foreboding. I need rainclouds so heavy they envelop me. I need the grey, cold Pacific, salt water crusting on my cheeks. I need your head on my lap. I need your soft ears and your deep brown eyes. I need the humor of your silent commentary, prance in your step, mischievous eyes. I need every memory I have ever had of you. I need new memories of you. Which will not come. Because these are the last eleven minutes of your life.

I need your intuition. I need your head heavy on my lap when you knew I was drowning in sadness. Sadness is drowning me now. I need your head, your seal eyes blinking up at me. These masses of buildings, cars, people everywhere are suffocating me. I feel foreign, I don't recognize anything. I can't breathe. I need to be far from here. I need to be close to you. To hold you one last time because you only have one minute to live. I need to tell you right now everything you have ever meant to me. Because the seconds are ticking and there's just no time and I'm so very far away.

I need to be home. To watch your ribcage rising and falling in soft breath. Not lowering the still and rigid weight of a body that once ran with me into cold ground. I can't bury you here. California's hot desert dirt isn't the place for you. And if it's not the place for you, why am I here? There is a circle of mourning, of all the people who have ever loved you or been loved by you, because they are the same. They will gather in your house, with their toes in your carpet, still warm from your heat. And yet I am here.
No comments:

This is probably a bad idea. 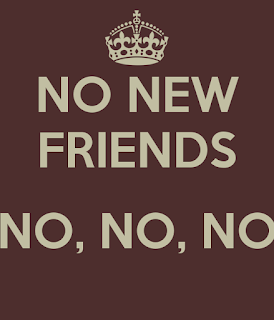 Social mores dictate that we must not admit out loud (let alone post publicly) that we are unsociable. New friends coming into your life are a blessing and you are always open to and welcoming to these new relationships. But the truth is, I'm not. I've finally come to the conclusion: I don't actually want new friends.

But the reality is much simpler. Over the last seven years we've built up a fantastic social circle in San Diego. Friends from B's first job here; friends from my rotating cadre of colleagues; prenatal classes through new baby friends; T's preschool friends and friends-of-friends-who-became-friends...

We've culled a bit; close friends have moved away; some new ones have moved in. Our rolodex of friends is now populated by 20 - 30 people we really like. And unfortunately, rarely see.

Most weeks stream by in a blur. I wake up; there's some morning activity that involves 1) COFFEE 2) cereal 3) struggles with clothes and small limbs and lots of complaining 4) rushing out the door; lots of work; a commute home and then in quick succession: dinner, PJs and bed. Not just the kids. B & I too.

Suddenly a weekend approaches and we are faced with Groundhog Day-like deja-vu of scheduling Family Time (just us 4), work, housework, home projects, a personal time/sanity break each for B & I and, if we're lucky, some social activity with friends. But then which ones? There are a few who I would consider close friends who I can count on one hand how often we've seen them this year. My best friend I rarely see outside of work. Even friends who we get to see fairly frequently we then lose for weeks or months to travel schedules, work hectic-ness or efforts to implement consistent nap or bedtimes (the Tyrannies of Toddlers/Preschoolers/Kindergarteners will be another post).

But isn't this how many of our friends' lives look, especially those with small humans they must care for 24-7?

Maybe. But it doesn't seem to hinder the four sets of Kindergarten parents and two preschooler's mamas who've sought playdates with our offspring over the last 6 months. As I've only followed up on one out of six requests I'm at the point where I have to avoid eye contact at school events and sometimes avoid the events all together. What kind of urchin of a human being doesn't want to set up playdates for her kids?!

Last night we finally went out with T's best-new-Kindergarden-buddy (the one "yes") and her parents for dinner at a lovely craft beer place with a fenced kids play area. We talked, ate, laughed, for THREE HOURS. Far from the boring, dull, politically maligned unfriendable folks I was hoping they'd be, they were great. Very friendable. Once again it seemed ludicrous for me to announce (in my head) "sorry, my friend roster is full."

Fortunately, this morning they moved 8 hrs away.


So if you're one of our friends, we miss you. We'd like to see you more. Please pass on tips of how you manage work, kids (as applicable), a social life and don't burn out.

For all other warm, interesting, funny, engaging souls I bump into in this world, maybe we can be friends too... someday.

Jen
Well first there was me... then there were B and I. Now we are a little family of four. With a dog.

Resources for the rollercoaster of parenthood 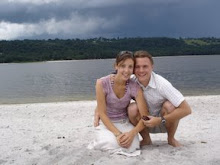 Tweets when I can't update the blog